Russia works with US, rebels in Syria air campaign 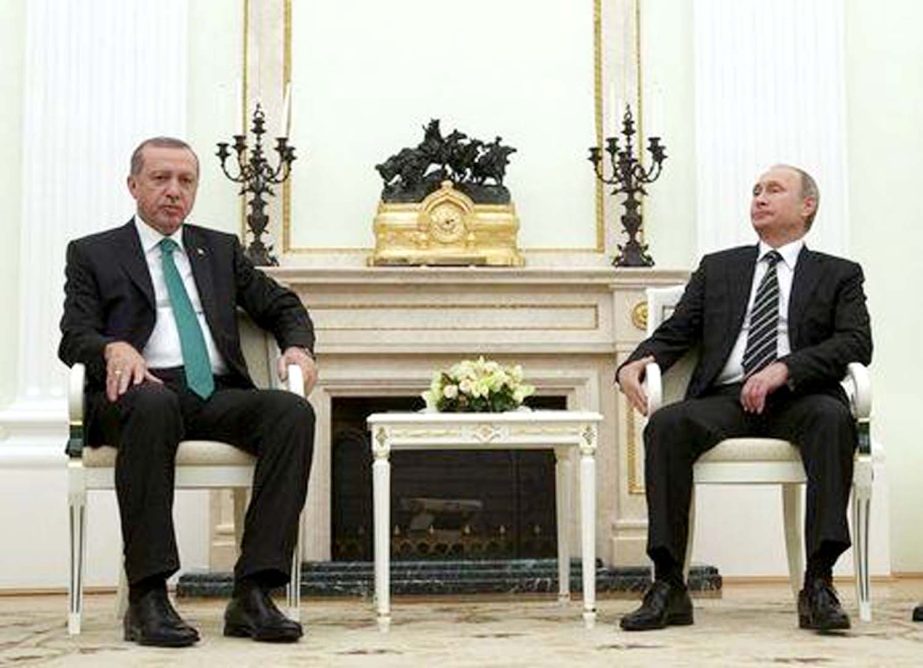 admin
Reuters, Moscow :
The Kremlin said on Wednesday that Russian President Vladimir Putin and Turkey’s President Tayyip Erdogan held a phone conversation and shared their opinions on the Syria crisis in light of ministerial meetings in Vienna last week.
Both sides confirmed they were willing to continue political dialogue, it said.
Meanwhile, Moscow said Tuesday it worked with opposition groups in its latest Syrian airstrikes while the US said its pilots communicated with Russian aircraft, in tentative signs the powers are working together to end the civil war ahead of UN talks.
Russian said its jets bombed 24 targets in Syria using coordinates supplied by “opposition representatives”, the first time it has claimed to work with those fighting Syria’s regime since beginning its air offensive.
“The coordinates of all of these targets were given to us by opposition representatives,” senior military official Andrei Kartapolov said, without specifying the groups involved.
Hours later the Pentagon said its fighter pilots communicated directly with Russian jets in the skies over Syria, in the first test of a new strategy to ensure the two sides’ parallel campaigns do not boil over into conflict between them.
Washington and Moscow signed an agreement on October 20 laying out rules keep their pilots away from each other in the air, after several close encounters raised the prospect of a mid-air collision or some other dangerous encounter.
A US-led coalition has been bombing Islamic State forces since December 2014, while the Russians opened an air campaign in September against a broader range of rebels that Western powers say is designed to support its ally, Syrian President Bashar al-Assad.
The burgeoning coordination between the two comes as Russian Foreign Minister Sergei Lavrov is set to meet the United Nations’ Syria envoy Staffan de Mistura in Moscow today.
The two met Friday in Vienna alongside top diplomats from 17 other international players including the United States, Iran and Saudi Arabia, in the broadest push yet to end the four-year conflict.
The participants who did not include any representatives of the Syrian government or its opponents agreed to ask the UN to broker a peace deal between the regime and opposition to clear the way for a new constitution and elections.
But divisions remain on the fate of Assad, with Russia and Iran resisting pressure from Western powers and Saudi Arabia to force the Syrian leader from power.

The sufferings of patients across Dhaka have been compounded during the coronavirus crisis as many doctors have stopped attending their chambers from fear of contracting the infection while diagnostic tests have also hit a snag due to the absence of technicians. The media has reported on many incidents of patients dying due to a lack of treatment amid the outbreak with many doctors facing accusations of avoiding coronavirus patients.Many victims have spoken about their woes in interviews.Abdul Majid Mollah, who...
April 3, 2020

Dhaka Metropolitan Meat Merchant Association along with Bangladesh Meat Traders’ Association organized a meeting on Thursday at Dhanmondi in the city demanding government training for the labours engaged in meat processing. The meeting also aimed to create public awareness about exportable animal waste.