Attacks on cops: One killed in Ashulia, 5 hurt as police van ambushed at B`baria 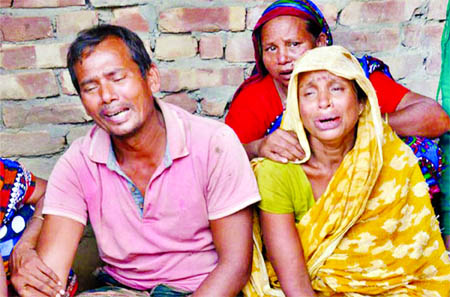 Relatives wailing as Industrial Police Constable Mukul Hossain at Baraipara Check Post in Ahulia was hacked to death while on duty. This photo was taken on Wednesday.

Joynal Abedin Khan :The deadly serial attacks despite the tight security at key-points of various cities including deploying BGB at airports at Chittagong and Sylhet are spreading panic at all level.A police constable was knifed to death and nine others received injuries in two separate attacks by some unidentified miscreants in Ashulia in the outskirts of Dhaka and Brahmanbaria on Wednesday.An industrial police constable was hacked to death and four other received injuries when some unidentified miscreants made a sudden attack on them at Baraipara in Ashulia on Wednesday morning.The dead victim is Mukul Hossain, 23, a constable of Sripur Police Camp while the injured is Nur-E-Alam, said Nazmul Hasan Kiron, Assistant Superintendent of Police (ASP) of Ashulia Police Station.The police official said, “Mukul and Nur-E-Alam were performing their duties at Baraipara on the Dhaka-Tangail highway at around 7:45am. Some unidentified miscreants stormed into the spot and hacked the two constables with sharp weapons suddenly, leaving them critically injured around.” Later, the injured cop members were admitted to Enam Medical College and Hospital in Savar where on-duty doctors declared Mukul dead. The condition of Nur-E-Alam is stated to be critical.Three more constables also sustained minor injuries in the attack and they have been given first aid, said the police offical.The first Namaz-e-Janaza of the constable was held in Ashulia after autopsy when senior police officials including, Officer-in-Charge (OC) of Ashulia Police Station were present. His body was taken to his village in Bogra district after the Janaza prayer.The filing of a case in this connection was under processing with the police station, the OC said.In another attack, five policemen, including a Sub-Inspector (SI), were injured when a police pickup van plunged into a roadside ditch while chasing a vehicle of alleged drug peddlers in Ghatura area of Sadar upazila of Brahmanbaria on Tuesday night, said Tapos Ranjan Ghosh, ASP of Brahmanbaria Police.The injured are SI Awal Bhuiyan, 35, constable Mithun Chandranath, 27, Ariful Islam, 32, Abul Bashar, 23, and Shahidul Islam. They were rushed to Brahmanbaria Sadar Hospital.”Being tipped off, a police team signaled a private car to stop in the area at night as it was allegedly carrying drugs. Police chased the car after the vehicle ignored the signal. The alleged drug smugglers opened fire at the police van, which veered off the road and plunged into a ditch, leaving the five lawmen injured,” the ASP said. Earlier, at least eight police personnel were killed and 50 others also received injuries in several sudden attacks by miscreants in the capital and some other districts in the recent years.On October 22, an on-duty Assistant Sub-Inspector (ASI) of Darus Salam Police, Ibrahim Hossain Mollah, 40, was stabbed to death by miscreants in the city.Earlier, Assistant Sub-Inspector Suzaul Islam of Pakshi police outpost was killed by unknown miscreant at Ishwardi upazila in the district on October 5.On February 5, a police constable has died after being treated for 19 days for injuries sustained during a bomb attack in Dhaka.The victim Shamim Miah suffered burns and splinter injuries on Jan 17, when petrol bombs and handmade bombs were hurled at a bus carrying police personnel. The attack left 13 police personnel injured.Earlier, an armed gang ambushed a prison van and snatched away three convicted JMB militants — two of them on death row — in Trishal upazila of Mymensingh on February 5 last year.On December 27, 2013, a police constable died after he along with eight others had became wounded as miscreants exploded several crude bombs into a police car in the Rajshahi city. Constable Siddhartha died from his injuries in Combined Military Hospital in Dhaka.Miscreants hacked four policemen near Chittagong city’s Batali hill area on November 4, 2013, leaving one dead and three injured. The deceased is Md Abdul Kaiyum, 26.In Khulna, a police constable was killed in a clash between law enforcers and Jamaat-Shibir activists at Goalkhali village under Koira upazila on March 11, 2013. The deceased was identified as Mofijur Rahman, 45, a constable of Koira thana.Earlier, A police constable was slaughtered by miscreants in Chuadanga district. The body of a police constable Ishaq Ali (50) was recovered from the field of Dinnathpur village of Chuadanga upazila.Home Minister Asaduzzaman Khan Kamal visited Enam Medical College and Hospital in Savar, where the wounded policemen were being treated.He said this attack was similar to the attacks on bloggers, writers and publishers in this year.Dhaka Superintendent of Police (SP) Habibur Rahman said: “We are conducting drives to arrest the killers and primarily suspect that Jamaat-Shibir activists are responsible for the murder.””We initially suspect that the Gabtoli incident is same to Ashulia murder. The culprits whoever involved in the killing will be traced down,” the SP said.Soon after the incident, senior police officials visited the crime scene and local police brought Ashulia area under security blanket and started comb drive to arrest the killers, as part of which about 15 check posts have been set up there immediately.

UNB, Dhaka :Many rebel candidates are still there in the 11th election race inAwami League(AL) ignoring party’s stern warnings of expulsion forever.Talking to UNB, many senior leaders said the ruling party is very much worried about the rebel candidates in the party, even more than their opponent candidates in the upcoming election.A five-member team has already started working on the issue with joint general secretary Jahangir Kabir Nanak — the most prominent among those deprived of candidacy — leading the...
December 7, 2018