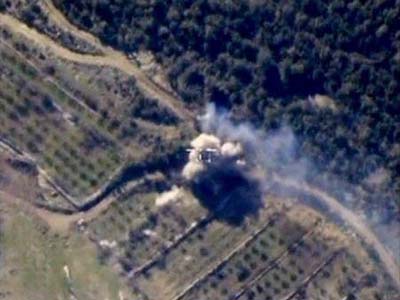 admin
Agencies, Beirut :
A confidential report by the global chemical weapons watchdog has found mustard gas again being used in Syria, according to the Reuters news agency.
According to Al Jazeera sources the gas was used during violence between Islamic State of Iraq and the Levant (ISIL) and a rebel group in the northern town of Marea in August.
It’s the first confirmation of sulphur mustard being used in Syria since the country agreed to destroy its chemical weapons stockpile.
A confidential October 29 report by the Organisation for the Prohibition of Chemical Weapons (OPCW), a summary of which was shown to Reuters, concluded “with the utmost confidence that at least two people were exposed to sulphur mustard” in the town of Marea, north of Aleppo, on August 21.
“It is very likely that the effects of sulphur mustard resulted in the death of a baby,” it said.
The findings provide the first official confirmation of use of sulphur mustard, commonly known as mustard gas, in Syria since it agreed to destroy its chemical weapons stockpile, which included sulphur mustard.
Related: Russia and US planes in safety test over Syria
The report did not mention ISIL, as the fact-finding mission was not mandated to assign blame, but diplomatic sources said the chemical had been used in the clashes between ISIL and another rebel group taking place in the town at the time.
“It raises the major question of where the sulphur mustard came from,” one source said. “Either they [ISIL] gained the ability to make it themselves, or it may have come from an undeclared stockpile overtaken by ISIL. Both are worrying options.”
Chemical Weapons Convention
Syria is supposed to have completely surrendered the toxic chemicals 18 months ago. Their use violates UN Security Council resolutions and the 1997 Chemical Weapons Convention.
The report, which will be formally presented to UN Secretary General Ban Ki-moon later this month, adds to a growing body of evidence that ISIL has obtained, and is using, chemical weapons in both Iraq and Syria.
Kurdish authorities said earlier this month that ISIL fighters fired mortar rounds containing mustard agent at Kurdish Peshmerga fighters in northern Iraq during clashes in August.
Meanwhile, air strikes by Russian warplanes on the Islamic State-held Syrian city of Raqqa killed 42 people earlier this week, including 27 civilians, monitoring group the Syrian Observatory for Human Rights said on Friday.
Fifteen Islamic State fighters made up the remainder of the death toll, the Britain-based Observatory said, after a series of strikes on Tuesday that hit the group’s Syrian stronghold.
The bombings add to a civilian death toll from Russian strikes, which the Syrian Network for Human Rights, another monitoring group, said on Monday stood at 254 people killed in just over a month.
It was also a rare heavy Russian bombardment targeting Islamic State rather than other insurgent groups.
Russia’s air force intervened in Syria’s four-year civil war on Sept. 30 on the side of President Bashar al-Assad, launching a campaign it said targeted Islamic State.
The United States says Russian raids have mostly hit other Syrian insurgents, including foreign-backed and more moderate groups.

150,000 irrigation pumps to be brought under solar system

UNB, Dhaka :The government has undertaken a programme to replace about 150,000 diesel and conventional electricity-run irrigation pumps with solar-powered ones.According to the Power and Energy Ministry, at present, the country has a total of about 1.66 million irrigation pumps. Of these, some 266,000 are electrically powered water pumps which consume around 1,300 MW to irrigate 1.7 million hectares of land.The rest 1.3 million diesel-run pumps, which consume 900,000 tonnes of fuel, are operated to irrigate the additional 3.4 million...
August 1, 2014

People from all walks of life including Road, Transport and Bridges Minister Obaidul Quader paying last repect to Ekushey Medal winner Poet Belal Chaudhury by placing wreaths on his coffin at the Central Shaheed Minar in the city on Wednesday.