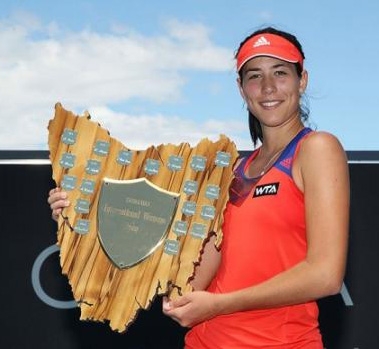 Spanish qualifier Garbine Muguruza won her first WTA title with a 6-4, 6- 0 victory over Czech seventh seed Klara Zakopalova in the final of the Hobart International Saturday.
Muguruza, ranked 58, had too much power for Zakopalova, with her groundstrokes taking her to victory in 70 minutes.
The Venezuelan-born 20-year-old joined Germany’s Mona Barthel, who won in 2012, as the only qualifiers to win the Hobart tournament.
It ended a big week for Muguruza, who knocked out second seed and Wimbledon semi-finalist Kirsten Flipkens of Belgium on the way to her first WTA final.
Muguruza did not drop a set from the qualifiers to the final as she tuned up for a first-round meeting with Estonian 24th seed Kaia Kanepi at next week’s Australian Open in Melbourne.
She swept aside compatriot Estrella Cabeza Candela 6-0, 6-1 in the semi-finals to set up her final with Zakopalova.
The 37th-ranked Czech had beaten top seed Sam Stosur 6-3, 6- 2 in the semis and will meet the Australian again in the opening round of the Open.

Our Correspondent :On the occasion of the 96th birth anniversary of Bangataj Tajuddin Ahmed, the first Prime Minister of independent Bangladesh, a wreath was laid to his memory at his residence in Kapasia, Gazipur on Friday at the initiative of Upazila Awami League and allied organizations.Simeen Hussain Rimi MP, chairperson of the Parliamentary Standing Committee on the Ministry of Culture and daughter of Bangataj, addressed the function as the chief guest at a function organized at the Kapasia Upazila Awami...
July 25, 2021

N Korea diplomacy has failed, ‘Only one thing will work’: Trump