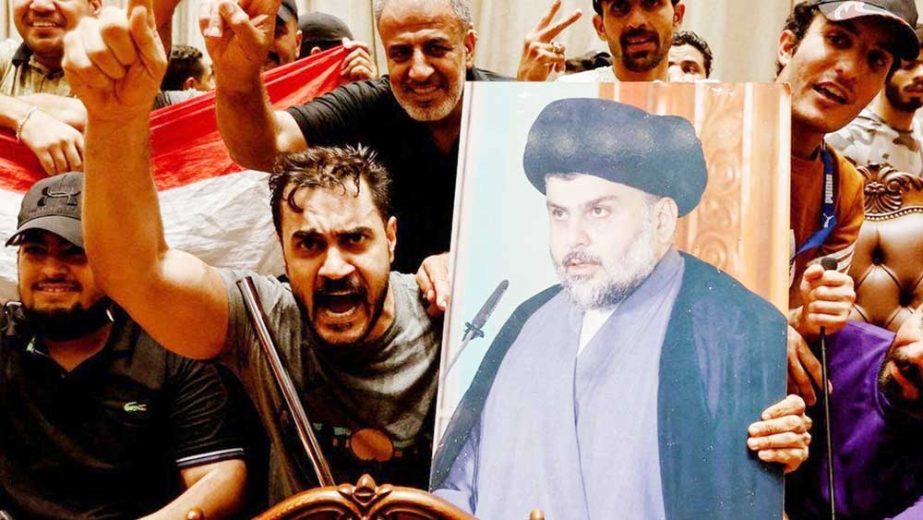 BBC :
One of Iraq’s most powerful figures, who has been at the centre of a long crisis over forming a government, says he is retiring from political life.
Moqtada al-Sadr, a firebrand Shia cleric with millions of followers, announced his decision on Twitter.
Hundreds of his supporters have been camped outside parliament for weeks after twice storming it in protest at the political deadlock.
His forces were prominent in fighting US troops after the 2003 invasion.
Mr Sadr’s announcement comes two days after he called for all parties and figures involved in political life following the US-led invasion of Iraq to quit.
His political alliance won the most seats in last October’s general election, but his MPs later resigned amid deadlock with a rival Shia bloc over the appointment of a new prime minister.
Mr Sadr said in a statement: “I had decided not to interfere in political affairs, but I now announce my final retirement and the closure of all [Sadrist] institutions.” Some religious sites linked to his movement will remain open.
Mr Sadr, 48, has been a dominant figure in Iraqi public and political life for the past two decades. His Mehdi Army emerged as one of the most powerful militias which fought US and allied Iraqi government forces in the aftermath of the US-led invasion which toppled former ruler Saddam Hussein.
He later rebranded it as the Peace Brigades, and it remains one of the biggest militias which now form part of the Iraqi armed forces.
Although the Mehdi Army had links to Iran, Mr Sadr had latterly distanced himself from Iraq’s Shia neighbour and repositioned himself as a nationalist wanting to end US and Iranian influence over Iraq’s internal affairs.
The rival Shia political bloc, the Coordination Framework, with which Mr Sadr’s bloc has been at loggerheads, mainly includes Iran-backed parties.
Mr Sadr, one of Iraq’s most recognisable figures with his black turban, dark eyes and heavy set build, had championed ordinary Iraqis hit by high unemployment, continual power cuts and corruption.
He is one of a few figures who could quickly mobilise hundreds of thousands of supporters onto the streets, and draw them down again. Hundreds have been camped outside parliament since storming it twice in July and August in protest at the deadlock.

Egypt hasn’t made international headlines for a while, but Egyptians themselves have still been making news. The crackdown on the Muslim Brotherhood that began after a coup toppled embattled President Mohammed Morsy in July has extended through the end of 2013, and will likely continue. At the same time, a low-level insurgency in the Sinai Peninsula has occasionally reached into major cities like Ismailiyya and Cairo. The government’s approach to the violence seems to be based solely around bringing as...
January 17, 2014

No-Smoking Club of Narayanganj arranges a discussion meeting on Sunday at Dhaka Reporters Unity marking the ‘No Tobacco Day’ with this year’s theme of Commit to Quit’ defined by World Health Organisation.