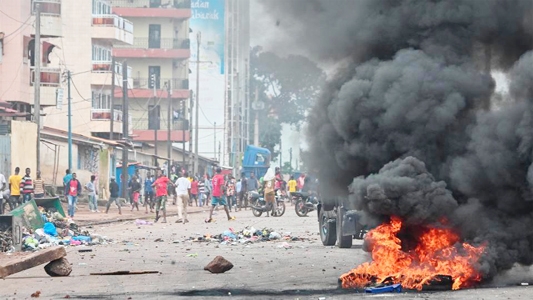 BSS :
A political coalition in Guinea on Saturday said that it was calling off planned protests against the country’s ruling junta, at the request of a West African regional group.
The National Front for the Defence of the Constitution (FNDC) had called for fresh demonstrations in the capital Conakry on Monday and September 4, after accusing junta forces of killing two teenagers during previous protests.
But in a statement sent to AFP on Saturday, the FNDC said that it had “complied with a request from the heads of the Economic Community of West African
States and Guinea Christians to suspend the peaceful citizen demonstrations”. The September 4 protest would have fallen on a Sunday, “a day of prayer for our Christian compatriots”.
The ECOWAS mediator for Guinea, former Benin president Thomas Boni Yayi, announced that he had completed his mediation mission on Saturday, after holding talks in the country since August 21.
The FNDC said it wanted “to give yet another chance to ECOWAS mediation so that it can find a way out of the Guinean crisis maintained by the military junta.” But it was not suspending its call for nationwide protests on September 5.
The FNDC, a coalition of political parties, trade unions and civil society organisations, was banned by the junta in August.
The alliance staged rallies on July 28 and 29 in which five people were killed. Two teenagers, aged 17 and 19, were shot dead during protests it called for on August 17, which were banned by the junta.
The FNDC, relatives and neighbours accused junta leader Colonel Mamady Doumbouya’s forces of having killed the two boys — charges the junta has denied. In a press release, Boni Yayi said that his mission was to meet with the authorities of the transition and socio-political actors for a dialogue which should “allow the return to constitutional order”.
During his stay, the mediator said he met with Doumbouya, members of the government, leaders of political coalitions and civil society and foreign diplomats. The poor but mineral-rich state has been ruled by the military since a coup last September that ousted president Alpha Conde, in power since 2010.
Doumbouya has pledged to hand over power to elected civilians within three years, a timeline that political players in Guinea and West African states want to be shorter. In May, the junta banned all protests and on August 6 decreed the dissolution of the FNDC.
The FNDC spearheaded protests against Conde while he was in power, fiercely opposing his bid for a third term that it said was unconstitutional. The demonstrations were often brutally repressed.
Since the coup, the group has turned its focus on the junta, progressively amplifying its concern over human rights and the pace of return to civilian rule.

Dr. M Abul Kashem Mozumder and Dr. Md. Shairul Mashreque :The social safety net is comprised of services rendered by the state or other institutions such as NGOs, civil societies. and the philanthropist friendly to the distress and the helpless.. “The term Social Safety Net is also used in a broader context to mean any programme that provides benefits to individuals or families. This broad definition includes socials ecurity, medicare and unemployment. In this context the Social Safety Net is...
June 14, 2018

Iraq sets up ‘loophole’ in US sanctions to buy Iranian power