Germany to speed up repatriation of rejected asylum-seekers 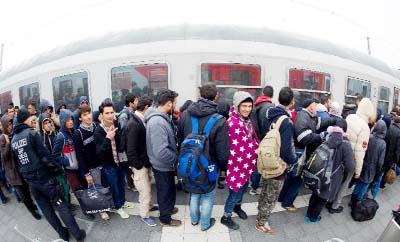 Migrants enter a special train to bring them to Duesseldof, western Germany, on a platform of the railway station in Passau, southern Germany.

AFP, Berlin :Germany plans to speed up repatriations of rejected asylum-seekers from new central hubs, Chancellor Angela Merkel and her coalition allies agreed Thursday, vowing to bring order to a record migrant influx.While refugees from Syria and other war zones would continue to be granted safe haven, those deemed economic migrants, mostly from “safe origin” Balkans countries, would be sent back within three weeks, said Merkel.Laying to rest weeks of coalition infighting, Merkel and the two other party chiefs also agreed on a new streamlined ID system and a central database for asylum-seekers.”We took a good and important step forward,” said Merkel, flanked by Vice Chancellor Sigmar Gabriel of the centre-left Social Democrats and Horst Seehofer of the CSU, the Bavarian sister party of Merkel’s CDU.The ruling trio agreed to set up three to five new “reception centres” nationwide for asylum-seekers who are deemed on arrival to have little chance of being allowed to stay.Newcomers sent there would be obliged to register to become eligible for state benefits during their stay, and they would be barred from leaving the administrative district where the facility is based.Berlin has already taken a firmer line against asylum-seekers from nations not at war, leading to a sharp drop in October of arrivals from Balkans states.Germany has also begun looking at limiting arrivals from Afghanistan, where the German army has been part of NATO efforts to stabilise the country.The coalition partners however rejected a conservative proposal for closed “transit zones” to be set up along the Austrian border, which the Social Democrats had likened to “internment camps”.Merkel, facing an increasing backlash over her welcoming stance to refugees, hammered out the compromise with her partners as new data signalled Germany is on course to receive one million asylum-seekers this year.Meanwhile, Canada’s new prime minister vowed to make good on campaign promises to resettle 25,000 Syrian refugees by the beginning of next year and bring home fighter jets battling the Islamic State group in Iraq and Syria.In his first interview since taking office on Wednesday, Justin Trudeau told the Radio-Canada network: “The goal is still to have 25,000 Syrian refugees in Canada before January 1.”Several government ministries have been mobilized to achieve this goal in such a short time, Trudeau said, adding the federal government would have to work closely with Canada’s provinces and municipalities.

AFP, London :Britain should build a third runway at London Heathrow airport to ease congestion, a government-appointed commission recommended on Wednesday despite opposition from environmentalists and London mayor Boris Johnson. The runway would cost o17.6 billion (24.8 billion euros, $27.6 billion), but would generate up to o147 billion over 60 years and create more than 70,000 jobs by 2050, the commission said in a long-awaited report. The report said Heathrow could provide “urgently required” capacity, but added that a rival...
July 2, 2015

Prime minister Sheikh Hasina, receiving aid from the several banks at Gono Bhaban on Wednesday for distribution among the cold-hit people