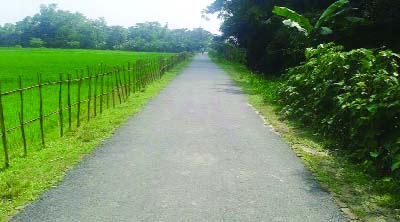 admin
Ehsanul Haque Jasim back from Sylhet :A gazette notification has been published naming a village road at Kanaighat upazila in Sylhet after a late person’s name to recognise contribution of his grandson M. A. Shakoor Siddiquei, a Bangladeshi-origin British citizen who was born in the village. Villagers are irked over naming of this road. It was reported that the villagers earlier requested Shakoor Siddiquei to contribute to develop the road and name it after his grandfather’s name. Re-name Deputy Commissioner (DC) of Sylhet Md Joynal Abedin recently issued the gazette notification naming the road of Niz Baurvagh village, which connects the village with Burhanuddin (Sylhet-Kanaighat) Road, after Hazi Abdul Hamid. Earlier, Emran Ahmed, ruling Awami League MP of Sylhet-4 constituency, issued a DO letter in favour of the name. The Union Parishad and other concerned had also approved the name. Upazila Nirbahi Officer (UNO) also recommended naming the road after Hazi Abdul Hamid. According to relatives and some others, Shakoor Siddiquei has already spent about one crore taka to develop the road. He has contributed in construction of bridges on the road alongside with filling up soil. Some villagers said, although Shakoor Siddiquei has the contribution in the road, the amount is not a crore. Government’s fund was also allocated in the pitch road.Villagers want to rename the road after their village name and they have already constructed a gate in the entrance point of the road naming it after ‘Niz Baurvagh Road’. UNO of Kanaighat Tareque Mohammad Jakaria asked the villagers not to construct the gate. But the villagers did not follow the order. The UNO in his recommendation mentioned that Shakoor Siddiquei has spent over one crore take to develop the road.  Abul Kashem Chowdhury, on behalf of the villagers, filed a writ petition with the High Court on July 15. He said that the gazette notification was published denying the HC order, as the court had issued a stay order on the road name and asked the concerned to explain in this regard. He alleged that the UNO played role in naming the road after a person’s name, denying opinions of the villagers. He said that the villagers want to drop the name of Hazi Abdul Hamid. Shakoor Siddiquei said that common villagers are not opposing the road-name. Some of the villagers are irked over the naming of this road, as he did not give extortion to some of youths who have bad reputation in the village and are engaged in dirty village-politics. He claimed that the guardians of those particular youths who are leading a part of the villagers signed a paper in favour of naming the road after his grandfather. He provided a copy of the signed paper to this reporter. Expressing regret, he said, “The villagers requested me to develop the road and name it after my grandfather’s name. Why sons of some of the villagers have now taken a U-turn position? It is unexpected. I have spent over crore taka on the road and I am ready to contribute more.”

BSS, Rangpur :Experts at a discussion here have said the newer cropping pattern evolved by RDRS Bangladesh increases output benefiting the farmers enabling them cultivating four crops annually on the same land.They were addressing the discussion organised by RDRS Bangladesh at a farmers’ filed day on the exhibition BARI Mug 6 variety mugbean field of farmer Wares Ali in village Khamar Fotehpur under Mithapukur upazila here on Friday.Mithapukur Upazila Agriculture Officer Dr Mohammad Sarwarul Haque attended the occasion as the...
May 25, 2014

Start work to get benefits under GSP Plus: EU envoy