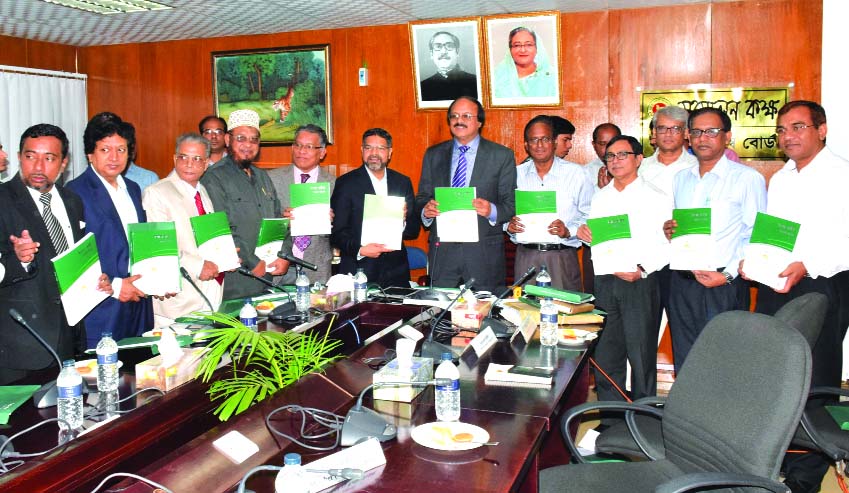 Chairman of National Board of Revenue (NBR) Md. Nojibur Rahman unveiling DCCI Tax Guide 2015-16 at the conference room of NBR in the city on Wednesday.

admin
Economic Reporter :
Dhaka Chamber of Commerce and Industry (DCCI) on Wednesday published Tax Guide 2015-16 with a view to creating awareness of paying tax among the business entrepreneurs along with individual.
Chairman, National Board of Revenue (NBR) Md. Nojibur Rahman unveiled the tax guide at the conference room of NBR in the city.
DCCI President Hossain Khaled, Vice- President Md. Shoaib Choudhury and Members of NBR were present on the unveiling ceremony.
NBR Chairman Md. Nojibur Rahman appreciated DCCI for publishing tax guide which helps the tax payers calculate income tax in a formulated way and encourage them to pay tax as well.
He said Income Tax Return submission is a critical process and this guide will help taxpayer submit their return submission. He said that NBR is going to organize winter Income Tax Fair during 19-21 November, 2015 and urged the tax payers to submit their return during this time who could not submit it earlier.
He said that NBR and the business community of the country are committed to work together to fulfill the revenue collection target of the present fiscal year. He also said that government has taken initiatives to prepare ‘Direct TAX Law’ in Bengali besides the existing English to make it easier to common people.
Chairman said NBR is working to modernize ‘Customs Act 2015’ to cope up with international business and this draft act will be submitted in the upcoming Parliament session for approval. He also informed that NBR has collected revenue of Tk. 31,000 core during the first quarter of the present fiscal, which was Tk. 28,000 crore in the same period of last year. He said from 2016 the new VAT Act 2012 will be implemented. He also urged the business community to bring their industries under tax compliance. NBR Chairman later unveiled the DCCI tax guide 2015-16.
DCCI President Hossain Khaled said that DCCI every year publishes the “Tax Guide” after the declaration of National Budget. The Tax Guide covers up-to-date information on Income Tax, Customs Duty, Supplementary Duty and Value Added Tax (VAT) along with different schedules, which will be very helpful to the business entrepreneurs, banks, non-banking financial institutions, insurance companies and other corporate business houses to understand the taxation system of the country.

Say no to bookish to build a brighter generation

Mexico quake : A revenge of nature?