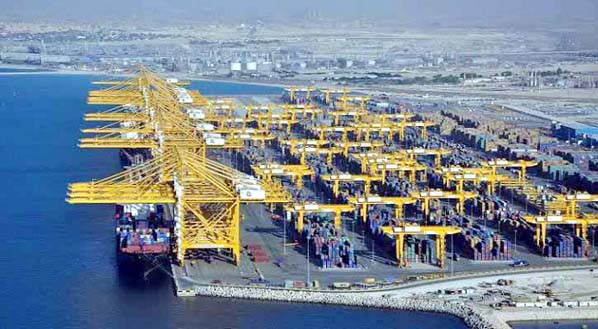 An architectural view of the proposed Chittagong Bay Terminal at the estuary of river Karnaphuli.

admin
Chittagong Bureau :
The biggest container terminal of the country under Chittagong Port Authority named Chittagong Bay Terminal is on the way of getting project clearance from the city watchdog Chittagong Development Authority following the decision of inter-ministerial meeting .
The estimated cost of the terminal is about Tk.9000 cr .
A meeting of Board of Members of CDA in connection was held on Wednesday at CDA conference hall with CDA chairman in the chair. Following the issue of clearance certificate by CDA, the long standing tussle between CPA and CDA is ended.
In the meeting, Additional secretary of the concerned ministry Abul Kashem, CDA chairman Abdus Salam, CDA Secretsry Tehera Ferdous, CDA members from CCC Hasan Murad, Md. Giasuddin, /Chief engineer Jasimuddin chowdhury, Superintendent engineer Hasan Bin shams, authorized officer Md. Shamim and Md.Elias were present.
CPA sources said a project proposal for said Bay Terminal was submitted to CDA in 2014 for clearance certificate but CDA ignored their prayer saying in the proposed site, city will built smart city, outer ring road and other projects .
In the meantime , the business community of the port city take strong steps for constructing Bay Terminal and finally a joint meeting of CPA and CDA was held in October last in presence of local legislators and business personalities.
Port sources said if the Bay Terminal is constructed over 2300 acres of land of length 6.5- km where at least 50 vessels can easily embark and disembark round the clock and can accommodate 16 vessels 9 meters depth at a time in the terminal.

The Cabinet on Monday approved the draft of ‘the Government Telephone, Cellular and Internet Policy-2018, raising the mobile phone allowance for the ministers and the secretaries to Tk 75,000 from Tk 15,000. The Cabinet approved the draft policy bringing some changes in the existing policy framed in 2004.Cabinet Secretary Mohammad Shafiul Alam briefed reporters at the Secretariat after the cabinet meeting held at the Prime Minister’s Office with Prime Minister Sheikh Hasina in the chair. According to the draft policy,...
May 22, 2018

Freeheld forced me to come out gay: Ellen Page