AFP, Tokyo :
The Bank of Japan Wednesday said its monetary easing blitz was winning the war on deflation as it held off announcing any fresh measures to stimulate the economy.
The unanimous decision after a two-day policy meeting was widely expected with analysts predicting the BoJ would launch an expansion of its asset-buying plan later this year to counter the effects of an April sales tax hike.
While the increase is seen as crucial to chopping Japan’s eye-watering national debt-proportionately the worst among rich nations-there are fears it will derail its economic recovery.
The BoJ kept its forecast for the long-sluggish economy to expand about 2.7 percent in the year to March, saying it “continued to recover moderately”, while it also stuck with its 2.0 percent inflation target.
The BoJ’s monetary policy “will support the positive movements in economic activity and financial markets, contribute to a rise in inflation expectations, and lead Japan’s economy to overcome the deflation that has lasted for nearly 15 years,” it said in a statement.
BoJ Governor Haruhiko Kuroda is to hold a regular press briefing Wednesday afternoon.
Kuroda unveiled the BoJ’s vast asset-buying scheme in April as part of a broader plan by Prime Minister Shinzo Abe to reinvigorate the economy and eradicate years of deflation with a policy blitz, dubbed Abenomics.
Reversing years of falling prices is a key goal of the BoJ’s plan and the inflation target is seen as crucial, although some analysts are growing increasingly sceptical of the bank’s ambitious timeline. “Our view remains that, barring some major economic or market shock, the Bank of Japan is likely to wait until the second half of this year before announcing any further monetary stimulus,” London-based Capital Economics said ahead of the BoJ’s meeting.
“This would allow the board to gauge how the economy has weathered this April’s consumption tax hike.”
Capital Economics added that it expected the BoJ to ultimately push back its inflation target by about one year.
“We have therefore pencilled in October for the timing of any official acknowledgement that the original two-year deadline will be missed,” it said. 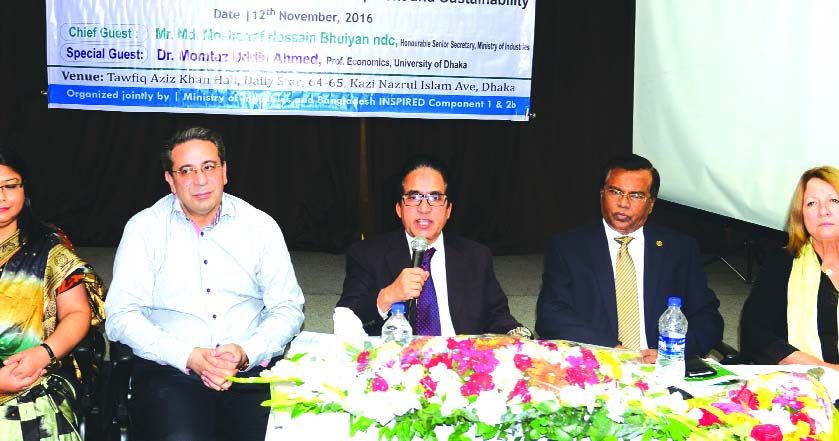 Mosharraf Hossain Bhuiyan, ndc, Senior Secretary of the Ministry of Industries speaking in a workshop on “The Role of Media in Promoting SMEs in Bangladesh” in the city on Saturday, organised by SME Foundation. Dr Momtaz Uddin Ahmed, Professor of Economics Department of Dhaka University, Ali Sabet, team leader and Anne Raine, senior expert of Bangladesh INSPIRED Programme- Component 1& 2b (a European Union funded project) were also present among others.

N Korea `ready for nuclear attack` amid show of force

Fortified rice to be available in OMS in city