PTI, New Delhi :
Signalling that Congress is ready for the battle ahead in the Lok Sabha elections, party president Sonia Gandhi yesterday attacked the BJP saying its “divisive” ideology is the “biggest threat” while it puts up a “pretence” of moderation.
Facing BJP’s PM candidate Narendra Modi as the main opponent, she said secularism was a matter of deep faith for the Congress and not a matter of political compulsion.
In 20-minute speech, she also touched on the issue of corruption, a major issue stalking the UPA II government, appealing to parties
to rise above political considerations to ensure passage of anti-corruption measures pending in Parliament.
“The biggest threat before the country is from communal forces and ideologies. Congress stands for uniting the people…but what is the approach of our main political opponent? I will tell you. You know it yourself.
“It is to divide the society on communal lines and spread hatred in the name of unity to impose a single identity. They hide their real face behind the mask of moderate pretensions. They criticize our leaders and level false allegations against them and they go to the extent of spreading violence. How can such an ideology be tolerated,” Gandhi said addressing the day-long AICC session without naming BJP.
Prime Minister Manmohan Singh, Rahul Gandhi, senior cabinet ministers and party leaders from all over the country heard her in rapt attention as she spoke of the successes of the UPA coalition.
She said the Congress workers should be proud that the party never compromised on its ideology. “For Congress, secularism is not a political compulsion but a matter of deep faith,” she said.
Gandhi said as the Lok Sabha elections near, the party need to send a “clear signal” that Congress is ready and prepared for the battle ahead.
“The Congress has faced many difficult times in the past, much tougher than today. But we have never lost heart. We have repeatedly demonstrated our resilience by remaining committed to our vision, to our values and the beliefs that have sustained us,” she said.
“In our long journey, we have seen many ups and downs. We have witnessed victories and faced defeats which are inescapable in politics. But we have kept ourselves vibrant,” Gandhi said.
And in these changing circumstances, she said, the Congress has to move forward in a gallant way. And in this, the party will be helped by its fighting spirit.
She said the electoral contest will witness a “sharpening combat” between competing ideologies, between competing interpretations of the past and between clashing visions of future.
“It will be a battle for India as was conceived by our founding fathers and as we cherish. It will be a battle for our age-old secular traditions,” she said. Referring to the issue of corruption, Gandhi said the UPA government has laid out a five-point agenda to fight graft.
She appealed to political parties to rise above political considerations to help get the various anti- corruption bills pending in Parliament passed when the winter session resumes on February 5. 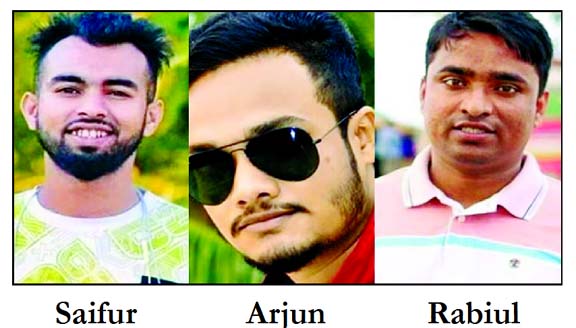 B Chy urges PM to bring all to discussion

Syed Hammadul Karim, General Manager of MetLife Bangladesh and Md. Rafiquzzaman, Managing Director of ACE Consultants Limited, along with other officials from both sides poses for a photograph after signing an agreement at MetLife office in the city on Tuesday. Under the deal, MetLife will provide Group Life and Medical Coverage to the eligible employees of ACE.