Allowing Syria to be divided peacefully may be the best option

THE present Syrian civil war had its roots in the Arab Spring of 2011-a series of disparate events which resulted in regime changes in several Arab states, notably Tunisia and Egypt. The Syrian opposition coalition has been recognised as the “sole representative of the Syrian people” by several nations including the United States, the United Kingdom and France-all permanent members of the UN.
Syrian rebels did not want regime change at the beginning. They desired democratization of the Assad regime. It was US President Obama who gave hope of ousting Assad. That hope of the suffering Syrians was soon dashed by his own later indifference. The United States became selfish and set about establishing strategic relationships with Iran forgetting the call of humanity in Syria. This is a hopeless situation for all those who value human life and human rights and see the United States as the leader for the world of human rights.
Syria is currently back in the focus of the international community as the so-called Geneva II conference is expected to start in less than a week to restart the Syrian peace process. The genocidal nature of the regime is further evident by the fact that more than 1,30,000 people are dead-a figure which the UN considers to be an underestimate. More than 1.7 million people are displaced as refugees—leading some NGOs to open chapters in Amman so that Syrian girls can be sold for marriage. The sheer human and physical cost of the War is fast approaching the exponential as women are also being routinely raped and tortured by both parties of the conflict.
Despite all of these the Western powers are convinced that the War can be resolved. The conflict is essentially sectarian in nature with the Alawite led minority government of Bashar Assad being supported by the Shia majority Iran and its armed faction the Hezbollah on one hand and the disparate Syrian opposition led by the Free Syrian Army being helped by the essentially Sunni states of Saudi Arabia and Qatar, alongwith support from Turkey and the United States, both in terms of arms and military training and other financial expenditure.
Knowing all of these, what can the Western powers do to prevent or end the human disaster in Syria? As of July 2013 the Syrian government controlled approximately 30-40 percent of the country which contained 60 percent of its citizens. Will the government be willing to come to a compromise with the rebels and allow Syria to be peacefully divided, or allow elections to be held which would form a unity government which would represent all Syrians?
In our view that is the best option available for saving Syrians who are alive only to suffer death and destruction and others who as refugees are enduring deprivation and inhuman exploitation. The free world has let them down taking advantage of disunity in the Muslim World. 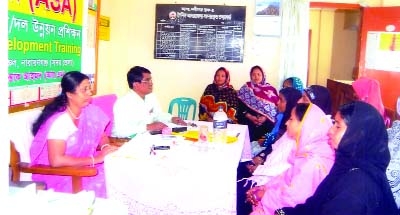 NARAYANGANJ: A day long workshop on strengthening women leadership was organised by the Association of Social Advancement (ASA), Nabiganj Branch-1 recently. About 25 group leaders took part in the workshop.

Boys need to be more attentive to their studies