Kurigram Correspondent :
Police recovered body of a youth from inside of a road-culvert at Chilahati village Belgachha union under Sadar upazila of Kurigram district Saturday morning. The victim was identified as Jalal Uddin, 25, son of Omar Ali of Kaniapara of Harikesh village under Kurigram municipality.Police sources said an accident took place face to face between a motor bike and a trolley on Kurigram-Rajarhat road near Tograihat area at Kurigram Sadar upazila due to dense fog at around 1:00 am on the day and the motor biker Jalal Uddin injured seriously. The trolley was going to Rajarhat Upazila while the motor biker Jalal Uddin was coming home from Rajarhat.After accident locals sent the injured through the trolley to Kurigram Sadar Hospital and informed Jalal’s relatives about the accident. Hearing nformation, his relatives rushed to the hospital at around 2:00 am and did not find him there. Then they informed Kurigram sadar police station about the missing. Police recovered Jalal’s motor bike (Bajaj-100 CC) from the accident spot at the night. On the early morning, Chilahati villagers found a body inside a culvert on Kalirhat-Nakkati road near Chilahati Government Primary School at Belgachha union and informed police. Police rushed to the culvert and recovered the body. Later the body was identified as Jalal Uddin by his relatives.
UNB from Bogra adds: A youth was found dead at Daspara village in Dhunat upazila on Sunday morning. Police recovered the body of Ashim Kumar Das, 25, son of Anin Chandra Das of the village, from a field adjacent to his house. Police quoting family members said Ashim went to sleep after dinner on Saturday night. His family members found his blood-stained body on Sunday morning.

Youth killed in Pabna road accident
BSS, Pabna
A young man was killed in a road accident at Madhpur bus stand on Pabna-Nagarbari Highway in Ataikula upazila here on Saturday. The deceased was identified as Milon Hossain, 24, son of Abdus Chhattar at Jagonnathpur village of the upazila.
Police said the accident occurred when a Pabna-bound passenger bus hit Milon on Friday night while he was returning home at 8 pm. He received seriously injuries. Milon was admitted to Pabna Medical College Hospital and later released for treatment in Dhaka Pongu Hospital. 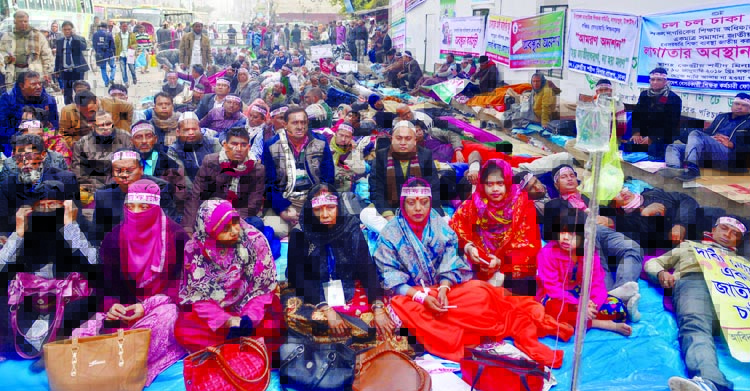 Non-Govt Teachers-Employees Forum in a fast unto death programme in front of the Jatiya Press Club on Monday demanding nationalization of non-government educational institutions.

Five U-19 players punished by ICC for misconduct

Local residents including school children and movement of vehicles faces immense sufferings to pass the dilapidated condition of a busy thoroughfare in city’s Bashabo-Mathertek area due to dumping of sands by the authorities of utility service sectors. This photo was taken on Monday.